The stirring beauty of the Welsh valleys can appear to mask the challenging mix of social issues faced by the region’s former mining towns and villages.

Following the decline of heavy industry, the South Wales Valleys have had to confront high levels of unemployment and poverty.

Better commuter rail links between Cardiff and the Valleys is seen as one way of boosting employment in the region. If the jobs don’t exist in the Valleys then create better infrastructure to get the workforce into the economic centres.

This is one of the arguments underpinning plans for a South Wales metro system. Proposals supported by the Welsh Government back the opening of new routes and increased service frequencies to rural communities.

Delivering the infrastructure needed for the Metro will also require fresh engineering skills – some of which will be homegrown thanks to new partnerships between the rail industry and training providers.

Coleg y Cymoedd was formed in 2013 following the merger of College Ystrad Mynach and Coleg Morgannwg. It is one of the country’s principle further and higher education providers and is split across four campuses in the Valleys: Rhondda, Nantgarw, Ystrad Mynach and Aberdare, where a brand new campus is due to open.

The site in Nantgarw is home to the college’s £3.3 million rail engineering facility, which opened in 2015. In July, training provider Intertrain and resource supplier Ganymede Solutions held an ‘On Track for Success’ celebration event at the college to welcome the first group of rail infrastructure apprentices to come through their new joint scheme. Ganymede and Intertrain received around 80 applications from talented young people who live in the surrounding area hoping to join the apprenticeship programme.

‘The college has given us the opportunity to set up the apprentice programme which has been successfully run in the North,’ said Garry Taylor, associate director at Intertrain, which has its headquarters in Doncaster, South Yorkshire, and is supported by 12 training centres throughout the UK.

Through a comprehensive selection process, a final group of 13 apprentices was eventually chosen. On the day, the group were three weeks into their 12-month course. The event served as a chance to highlight the opportunities that lie ahead and demonstrate some of the skills that they had learned since the start of the programme.

Says Garry, ‘We’re all here today, fundamentally, to celebrate the success of the apprentices that we see behind us. And it’s a new venture, a new celebration between three partners.’

Intertrain was set up in 2003. The company initially operated out of the managing director’s living room and has grown to become one of the largest railway training providers in the UK. Intertrain began offering apprenticeships in 2011 and has now trained around 1,000 apprentices – some of which have gone on to hold senior positions in the industry. ‘The system works but we have to have the buy in,’ said Garry.

The apprentices will divide their time between the college and being on site. They will be deployed by Ganymede, which has several contracts in the region and is the primary supplier of contingent labour to the LNE, Wales, Western and Wessex routes, in small teams to worksites around the country. They will help Network Rail deliver on its extensive maintenance activities in Wales, which in an average year involves the renewal of around 70 kilometres of plain line, as well as all the other necessary maintenance and repair works.

David Stanbury, Network Rail’s route programme director in Wales – someone else who began his career as an apprentice – and Jan Barrett, route C&P manager Wales at Network Rail, described the kinds of projects the apprentices would be working on during their apprenticeship. To demonstrate the variety of work, their presentation referenced the large-scale renewal carried out on the grade II listed Cynghordy Viaduct earlier this year.

‘For me, investment in apprentices is investment in our business future,’ said David. He went on describe the rail industry as a ‘fabulous family to work for’ and a positive environment for apprentices. ’They feel as if they can make an impact in the company.’

Benchmark for the future

Earlier in the year, the Welsh Government announced it would be increasing its funding pot for apprenticeships from £96 million to £111.5 million for 2017/18 in order to tackle skills shortages in key sectors. Vikki Howells, Assembly Member for the Cynon Valley, explained how the government wanted to increase the number of 18 and 19-year-old apprentices and get more learners to pursue qualifications at Level 4 and above.

‘You’re going to be the benchmark for the others,’ said Stuart Fraser, account director at Ganymede, talking about his hopes of expanding the programme to run more frequently in the future.

Stuart described Ganymede’s rapid growth since he joined the company eight years ago. From having a team of around 35 operatives in 2009, Ganymede now has around a thousand skilled operatives on its books.

‘This has been achieved by building on our great reputation for delivering on our promises to where we have become a go-to company in the industry for any workforce solution,’ said Stuart, who also stressed the company’s strong safety culture – one of its core values is ‘safety first, safety always’ – which is embedded into the apprenticeship programme.

Having also joined the industry as a trackman in the mid-1990s, Stuart had a few words of advice for the new starters. ‘I started back in 1994 and to this day I am frequently asking questions, I’m still learning,’ said Stuart. ‘If you don’t ask, you’re never going to fully understand the purpose of what you’re doing or more importantly get to where you want to be in your career. It’s the old adage, “you get out what you put in”. So, stay focussed, stay committed and enjoy your futures and more importantly always strive to be the best that you can be.’

Garry also described how things had changed since he joined the industry in 1999. At that time, he received a two-day course, which he had to pay for himself, and was sent out on track almost immediately. He went on to do a civil engineering degree and later discovered his passion for training.

‘Nothing is out of reach,’ said Garry. ‘You will make a career for life, something you can be proud of.’

That sentiment was echoed by the chief executive of the National Skills Academy for Rail (NSAR), Neil Robertson. One of NSAR’s functions has been to shape the new Trailblazer apprenticeship standards in rail and the organisation is also actively involved in the attraction and placement of new apprentices.

Neil described how many of the industry’s senior decision makers started their careers as apprentices. ‘You are in jobs that will be well paid,’ he said, addressing the group. ‘You’ve made a good choice.’ 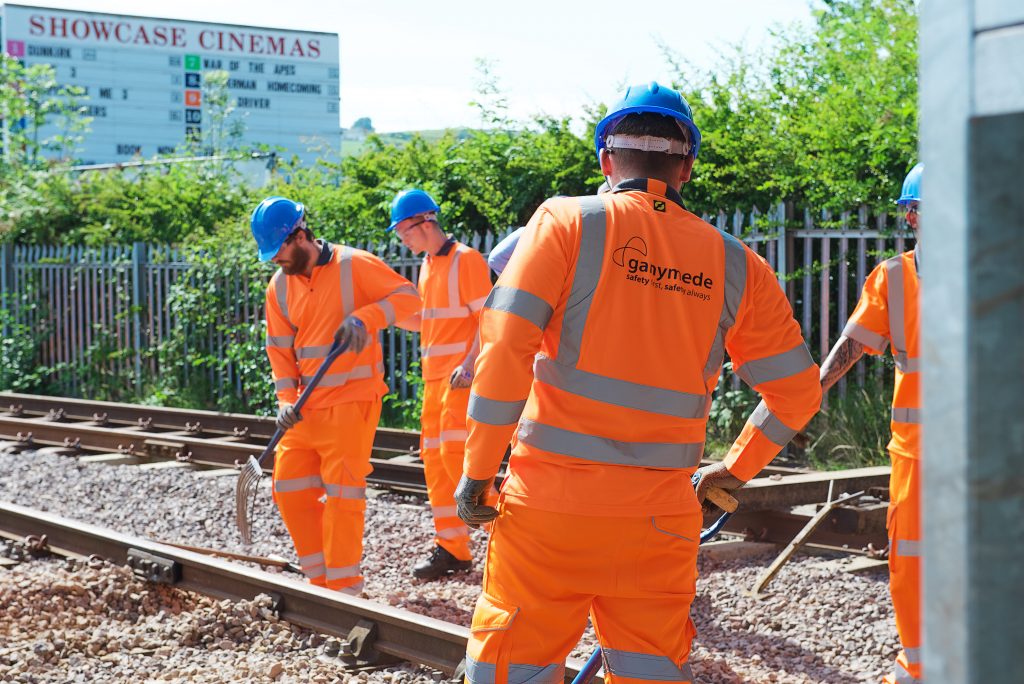 Coleg y Cymoedd’s smart, modern campus is a stark contrast to the mining heritage of the surrounding community in Nantgarw. The college is actually located on the Nantgarw colliery site, which closed in the mid-1980s.

Much of the celebration event focussed on the opportunities that are available to current railway apprentices. However, Matthew Tucker, director of business services at Coleg y Cymoedd, again stressed the benefit of the programme to the surrounding area.

In a first for UK engineering, an 11,000-tonne curved concrete box has been successfully pushed under the East Coast main line at Werrington near...
Read more
Rail News

A new £29 million Intermodal Rail Freight Terminal, that is being constructed by Winvic Construction for Prologis at its DIRFT intermodal logistics park in...
Read more