Future of rail investment: What the Hansford Review tells us

Network Rail had lost the borrowing mechanisms it once had and needed to find a way for the private sector to invest more in Britain’s rail infrastructure.

‘Mark phoned me just before Christmas and asked me if I would take it on,’ said Peter, leafing through a copy of his 60-page report.

Peter agreed to take on the challenge and, with the help of the Nichols Group and Rail PR, put out a call for evidence to the industry in January this year.

Next in the series

The Hansford Review was published at the end of July. It listed the various barriers – some physical, some behavioural – that currently restrict private-sector investment and made 12 recommendations for Network Rail to consider. More than 150 parties were consulted and material submitted has all remained confidential, allowing the industry to speak frankly about its biggest customer.

‘I think there were probably some surprises,’ said Peter. ‘We didn’t go into the review with all the answers, or even all the questions actually. We knew what the basic exam question was: how to get more private-sector funding into Network Rail.’

Peter sees his independent report as the latest instalment in what has become a series of self- reflection for the industry that started with McNulty in 2011. The debate has since been moved on by Network Rail chairman Peter Hendy, Dame Colette Bowe and the former chief executive of HS1, Nicola Shaw.

The review sets out the various different models for project delivery that could be explored, the challenges the private sector faces and, importantly, what Network Rail could do to make rail infrastructure investment a more attractive proposition.

The review makes several points. Network Rail needs to get better at publicising the pipeline of projects to potential investors, it should give routes the autonomy to look at private-sector opportunities in their regions and it should put in place repeatable processes to make private investment the norm. Over the next 12 months, Network Rail has been tasked with identifying ‘pathfinder projects’ to test different delivery models.

More private sector involvement would lead to other benefits besides additional funding, said Peter. ‘Mark Carne was very clear that for him this wasn’t just about getting other people to fund, but it was about actually creating the pressure on Network Rail to deliver more efficiently. It is about reducing cost.’

Peter also felt strongly that any organisation that stood to benefit from new infrastructure should contribute to its construction costs.

‘That needs to change,’ said Peter. ‘If you’re going to make massive benefit from a new station, you pay the appropriate amount for it. Why should the rest of the railway subsidise that?’

However, Peter said he wasn’t advocating a ‘free for all’ – it wasn’t an open invitation for anyone to pursue any rail project.

‘This isn’t an open book to allow any old project to be built. There are bad projects out there that people are thinking about… It’s only projects that really can be seen to meet the right strategy.’

He went on, ‘This is not about a less safe, less integrated railway. This is about opportunities to bring in funding.’

Peter believes some incorrect conclusions are already being drawn about his review. One of those is that its recommendations, by their nature, suggest no future for a centralised organisation like Network Rail IP.

‘We’re not saying that by any means,’ said Peter, keen to stress that the report instead questions whether IP needs to always take the lead role in delivery. IP will still have to play a major role in the largest enhancement schemes, said Peter.

The report focuses on route devolution. Specifically, it recommends giving the routes the commercial nouse to pursue different kinds of design and delivery models with private sector partners on their patches. ‘They know their route, they know their local investment, they’ve got the ongoing relationships,’ said Peter.

Peter hadn’t initially appreciated quite how big a role the routes were now playing and was conscious that the recommendations needed to work for a route structure. It points to a move away from Network Rail’s traditional hub and spoke delivery model and even talks about Network Rail routes competing for projects against the private sector.

Much of the review focusses on how Network Rail deals with third parties. ‘I think the biggest take-away probably is about Network Rail changing its approach to provide a welcoming, predictable and trusting environment,’ said Peter. The report itself talks about the difficult and ‘fragmented’ experience companies said they had encountered when dealing with Network Rail.

The report calls for a new service level agreement to be drawn up that establishes the terms of business between Network Rail and third parties. It also states that partners should have a single point of contact within Network Rail to help them through the process.

The review found that one of the biggest barriers blocking private-sector investment is the level of financial risk that railway projects can represent.

Uncertainty at the early stages of projects can even make the cost of bidding unviable for many companies. The review also said there was a pressure on companies to accept ‘emerging cost’ contracts which put any additional project cost on them even if it has been caused by a Network Rail error.

Several recommendations were made in the review to try and address the issue of risk. The review recommends creating an ‘early development fund’ to help cover some of the initial bid costs and produce more ‘high quality proposals’.

Hansford raises the issue of standards and the pressure that can be put on third parties who are required to make changes to the cost and scope of projects to meet standards dictated by Network Rail. ‘They’ve had standards imposed on them and they can’t understand why,’ said Peter, who believes that some kind of an appeals process is needed.

Having described the challenges facing Network Rail, Peter pointed to a section on page 10 of the report headed ‘Dependence on others’. It states, ‘Network Rail cannot deliver the recommendations of this review alone. It will need the support of the regulator, government and the wider industry.’

The industry is lacking a particular body to consider the issue of private sector involvement overall. ‘Is it the Secretary of State or is it the regulator, is it Network Rail board?’ said Peter, who believes it is a role that would have fallen under the remit of the Strategic Rail Authority (SRA) – a body of which he was an executive director. However, he isn’t advocating that the SRA be resurrected. 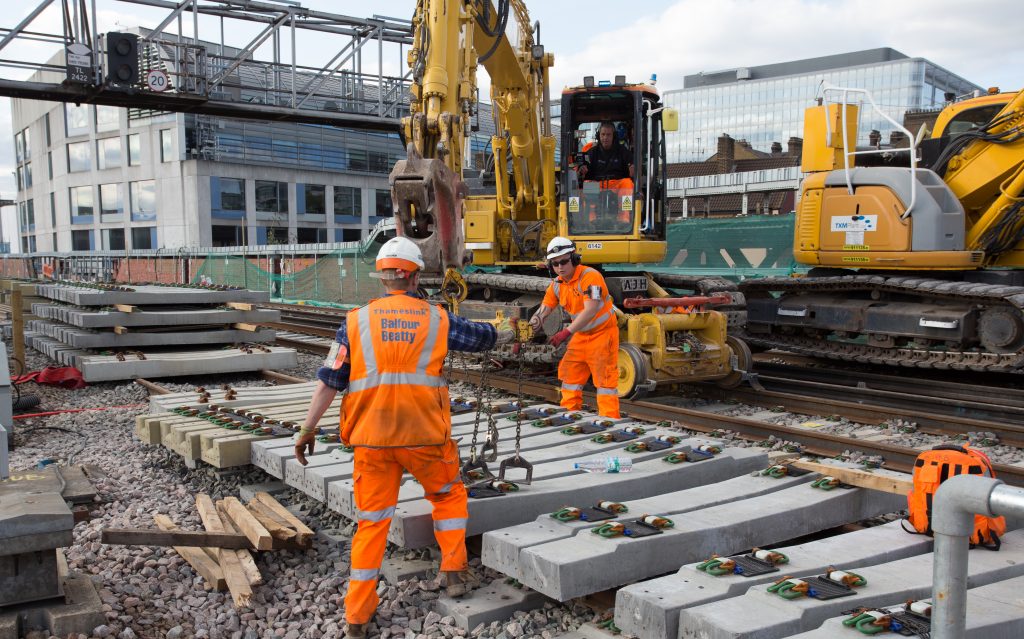 Peter first met to discuss the review with Network Rail at a board meeting in Cardiff in April. Another meeting followed in May and Network Rail received its copy of the report in June.

Network Rail has committed to publishing regular updates on upcoming opportunities for third parties, agreed to provide flexibility around standards and will create a service level agreement for dealing with partners. The Anglia route will become the test bed for these reforms.

In some cases, Network Rail appears to have taken Peter’s recommendations a step further. In a statement, Network Rail said it planned to launch a reward scheme which would share money saved through innovation with its partners.

Mark Carne said, ‘I am determined to create an environment where innovative third-party companies can compete for and directly deliver railway projects. These reforms mark the next stage of Network Rail’s transformation, having already decentralised into nine devolved individual businesses.’

He added, ‘I am also determined to find ways for the private sector to directly invest in railway projects. As a government-owned business, this has some challenges, but by unlocking private finance we can potentially deliver railway improvements that would otherwise not be possible.’

A deal with the Derby-based engineering company Resonate will be the first to test this model. Resonate, which is working on future traffic management systems through the Digital Railway programme, has agreed to finance the introduction of the new technology and will in turn benefit from the savings it’s expected to yield.

The widely accepted outlook is that there will be less government funding available for Network Rail enhancements in CP6 – a point touched on in the review. Without private- sector funding, Network Rail is unlikely to be able to deliver the scale of improvements it would like to.

‘There’s two options,’ said Peter. ‘One you have a smaller CP6 or two you open it up for others to fund part of it… At the same time you have the benefit of pressure to reduce your own cost.’

Peter continued, ‘I’m confident that they will grasp the opportunity to make significant change here, which is great because it means the whole thing’s been worthwhile.’

A downloadable copy of the Hansford Review can be found on the Network Rail website or at www.thehansfordreview.co.uk