Pizza boxes piled in a corner, eyes fixed to laptop screens and sugary foods scattered around the room. It might sound like a student’s typical night in but this is actually the setting for innovation.

Techies, coders, strategists, designers. These are the figures striving to make HS2 as efficient, effective and safe as possible by developing new ideas and reengineering the most advanced technology around.

Organised by HS2 Ltd in partnership with Transport Systems Catapult, more than 100 innovators from non-rail sector organisations met in Milton Keynes in December for a HS2 ‘hackathon’, to offer a fresh perspective on a number of safety, training and maintenance inspection challenges.

“A lot of the capabilities that we need – things like condition and health monitoring – are really prevalent in our automotive and aerospace sectors, and we have some of the best expertise in the world,” says HS2’s head of innovation, Iain Roche, who previously held the same role at Rolls-Royce.

“A big part of what we’re doing is bringing in some of that knowledge and thinking from other sectors and looking at how that would translate into our world.”

Iain might lead on innovation but it isn’t his sole job to innovate. Instead his role is to act as the catalyst for innovation by creating an environment that enables an increased uptake of it. Crucially, his remit is to do this in a way that delivers good value to the taxpayer.

Iain said that a lot of the technology that HS2 needs is already being used in other sectors and that it shouldn’t “create technology for the sake of it”.

Led by the former head of innovation for one of the world’s largest makers of aircraft engines, with support from university researchers and specialist tech firms, it is not from inside the rail industry that HS2 is looking for its innovators but outside.

RailStaff spoke to some of the hackathon contributors to find out how their ideas could impact the delivery and operation of Britain’s second high-speed line.

Using augmented and virtual reality to data crunch is John’s area of expertise. Having previously worked for Ordnance Survey, helping to develop a new generation of mapping software, and later a number of games developers, where he honed his real-time 3D programming skills, the lead software developer has been looking at how virtual reality specialists Clicks and Links can use big data to help HS2.

John and his colleagues showcased the use of augmented reality (AR) to visualise real-time information on HS2’s track, tunnels and trackside infrastructure at the hackathon. They demonstrated how a worker trained in track safety could inspect an asset using an AR headset while specialist engineering colleagues watch the feed and communicate from the office, removing the need for everyone to be on site.

AR could allow the operator to access information on what needs to be done to fix an asset, for example, just by looking at it.

Andrew is hoping to improve safety culture by re-engineering wearable technology that is used in the health sector.

Innovation may be at the forefront of his mind at the moment but it hasn’t always been. In the 1960s, he started out as a professional contemporary dancer and later ventured into photography. After switching between creative roles, he put it all aside to become a full-time family carer and then set up his own homecare agency.

From his firsthand experience, Andrew saw the potential to exploit technology for the benefit of patients and developed wearable technology to monitor their health. Teaming up with Aurora Computer Services, specialists in facial recognition technology, Andrew and his company, The Future Care, hope to develop a system for detecting and raising the alarm if employees are showing signs of fatigue or illness whilst working on the railway.

Similar to the trucking industry, the technology could be used to monitor train drivers and recognise if they had fallen asleep and react by applying the brakes.

After graduating as an electrical engineer from the University of Malta, Dr Claire Ellul has worked in the field of geographic information systems (GIS).

Currently, Claire, a data scientist, lectures and leads a team conducting research into 3D GIS and building information modelling (BIM) integration at University College London, working out how to combine the best of both –  GeoBIM – for improved asset management. 3D GIS enables linking, visualising and analysing information that otherwise couldn’t be joined.

GeoBIM would see BIM contribute information on the quantity and type of materials needed for a construction project while GIS calculates the most cost-efficient route for bringing materials on site while avoiding school traffic and the historic town centre, for example. 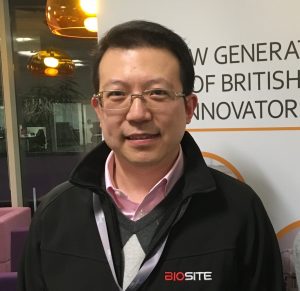 Building on a background in algorithm system design and development, Li co-founded Biosite in 2010. The company has created a number of biometric access control systems which use fingerprint scanners to control site access.

Biosite products already increase safety at hundreds of construction sites across the country, but Li wants to measure, monitor and manage competency, training, fatigue and general welfare through the biometric linking of HS2’s workforce. This would enable the effective tracking of each member of the workforce from site to site to ensure that health, safety and security is optimised.

Li previously worked as a mobile phone engineer for Motorola and worked as a scientific programmer developing cancer detection software.