There’s far more to Crossrail than a 73-mile railway. Stewart Thorpe discovers how the project has helped to set new wellbeing standards.

Accident levels during the construction of the Olympic Park, in preparation for London 2012, were recognised as exemplary practice – until Crossrail came along.

Underground construction sites and railways are both considered high-risk environments. Combine the two, on sites which operate 24/7 with up to 10,000 workers in total, and you’re presented with a mammoth challenge for safety planners.

Crossrail’s AFR hasn’t always been so low – and there was the high-profile death of construction worker Rene Tkacik, when part of the sprayed concrete tunnel lining, which had not fully set, fell on him. But lessons have been learnt. Thanks to technology such as thermal heat cameras to monitor concrete, augmented reality to enable intelligent maintenance and initiatives like its custom-made course and equipment requirements for lorry drivers, safety is Crossrail’s core value.

Safety has not stood alone but shoulder to shoulder with health and wellbeing as part of the megaproject’s occupational safety and health (OSH) strategy. Safety might steal the headlines, particularly when things go wrong, but expectations in health and wellbeing have been just as high and that is not by chance.

Martin Brown has been Crossrail’s health and safety director for the past 20 months. He previously advised the Olympic Delivery Authority as an independent safety expert and has worked with Crossrail’s staff and contractors to oversee the delivery of a number of initiatives.

In recent months, fatigue, specifically microsleep, has caught the attention of the Rail Accident Investigation Branch in its investigations of the Croydon tram crash and a collision with buffer stops at King’s Cross station. Martin said that fatigue and shift work has been a big issue for Crossrail as it works towards ‘Target Zero’ and ensuring all workers go home unharmed.

The project’s demands and the resultant shift work has been meticulously monitored and managed to reduce possible health and safety risks from overexertion and lack of sleep.

As well as a seven-step management plan for shift workers, covering initial assessments, regular reassessments and educating workers on lifestyle factors which can help to reduce fatigue and the health risks of shift work, Crossrail has also documented a number of good practices for contractors to follow. These specifically restrict shift working hours and stipulate periods of rest over days and weeks to minimise the risk of accident as a result of fatigue.

Across 2016-17, the Health and Safety Executive reported that 49 per cent of working days lost due to ill health were because of stress, depression or anxiety.

Further data from the Office of National Statistics reveals that the risk of suicide among low-skilled male construction workers is three times higher than the national average for men. Martin said it was important that a conversation surrounding mental health took place as part of Crossrail.

After taking part in a three-day course, volunteers were equipped with the necessary skills to provide support to colleagues experiencing mental health issues. They helped to promote mental health awareness and, with support from senior OSH personnel, react in times of need.

Martin said that this programme wasn’t about “training psychiatrists”, but about equipping workers with the knowledge to start conversations with those who may be showing signs of stress. The mental health first aiders are stationed across a number of sites and offices on the project and can play a crucial role in staff wellbeing.

“In the time we have been trying this, we’ve had a number of people who’ve had conversations that have helped them to deal with their problems,” he said.

“Not only has it helped to resolve their problems, it may have helped to prevent potential suicides.”

As part of this focus on mental health, former boxer Frank Bruno helped to tackle the stigma surrounding the subject by speaking to staff about his own battle with mental health problems, as did CEO Andrew Wolstenholme who shared the experiences of those close to him.

Crossrail’s contractors all began the project with their own health and safety culture. To help learn from each other, share best practice and guard against complacency, Crossrail introduced ‘Stepping Up Week’ in 2013. Following its initial success, the week became a biannual event.

Stepping Up Week was created to improve levels of health and safety awareness and focus on key topics such as health and wellbeing.

Held across all of Crossrail’s sites, the week included health and safety activity schedules specific to each site and the risks its workers were exposed to. For example, this included: mock crane rescues, health and wellbeing checks, guest speakers and exercises to improve hazard spotting. 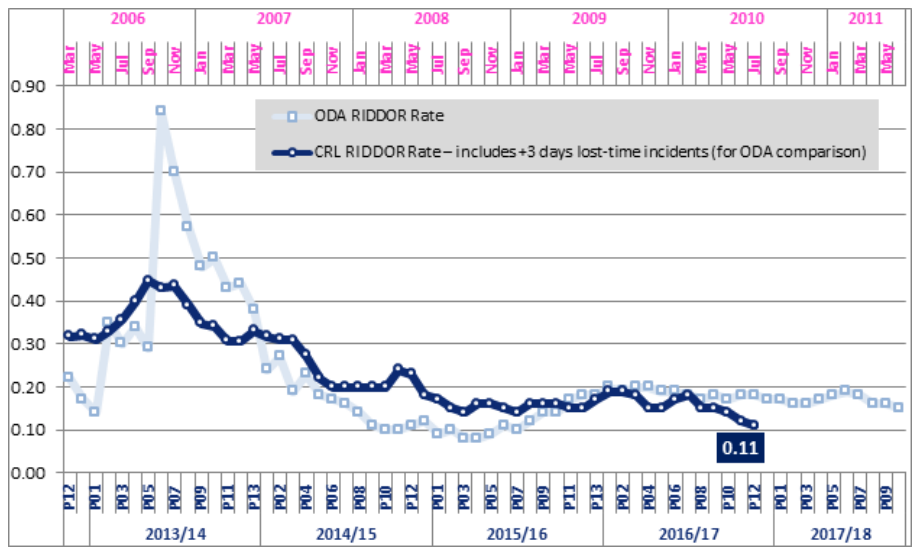 Above: Crossrail’s safety record (Dark blue) mapped against that of the Olympic Park

These initiatives helped to secure Crossrail’s legacy as a project with high OSH benchmarks. They have also benefited the wider industry.

Martin said that he has already spent time with his counterparts at HS2, TfL and Crossrail 2 to share best OSH practice. Lessons learnt from Crossrail have also been carefully documented on a dedicated online archive (Crossrail Learning Legacy) to help establish these practices within the supply chain.

Keith Morey, chair of IOSH’s Railway Group, praised the work Crossrail has undertaken, especially around provoking conversations on mental health. He said that while it will take many years to gauge the true measure of success from these wellbeing initiatives, he was looking forward to seeing what comes next.

“Crossrail has taken what was available at the time and taken it forward,” he said. “It will be interesting to see how HS2 can improve that again.”

The Crossrail project will start to become a distant memory when the Elizabeth line opens in December but as an Olympic legacy likely helped to bore a progressive rail project in London, in turn it will lead to even greater achievements and even higher standards.

A picturesque footbridge over the Chiltern main line in Buckinghamshire is to undergo a major overhaul to make it safer and more reliable for...
Read more
General Interest

The old footbridges at Kidsgrove station, which has an unusual triangular shape, are to be replaced with new bridges and lifts as part of...
Read more
Company News

Rail Operations (UK) Limited has signed a framework agreement with Stadler for the supply of 30 Class 93 tri-mode locomotives, of which an initial...
Read more
Company News