If you go to Network Rail’s material handling depot at Whitemoor, Cambridgeshire, you’ll be warned about two rather unusual hazards. After going through the routine safety warnings during a recent visit, site manager Natalie Whitehead explains what to do if we encounter any WW2 bombs or escaped prisoners.

The facility – the largest of three such Network Rail sites – recycles around 79,000 tonnes of scrap metal each year. There are heavy-duty forklift trucks and cranes moving old sleepers, bits of track and ballast, four sidings and various equipment and machinery used to cut, crush and prepare materials for reuse.

The full 42 hectare site – which includes a large GB Railfreight distribution centre with 33 sidings – re-opened in 2004 and the material handling depot in 2011 thanks to work from principal contractor Spencer Group. In a previous life it was once an important marshalling yard – so much so that it was targeted by German bombers during World War Two. Not only do workers and visitors have to be aware of unexploded bombs in the ground, the site neighbours the Category A Whitemoor Prison.

Not that any of it fazes 25-year-old Natalie, who has risen from being a part-time production assistant to managing and overseeing the safety of 23 staff in just five years. 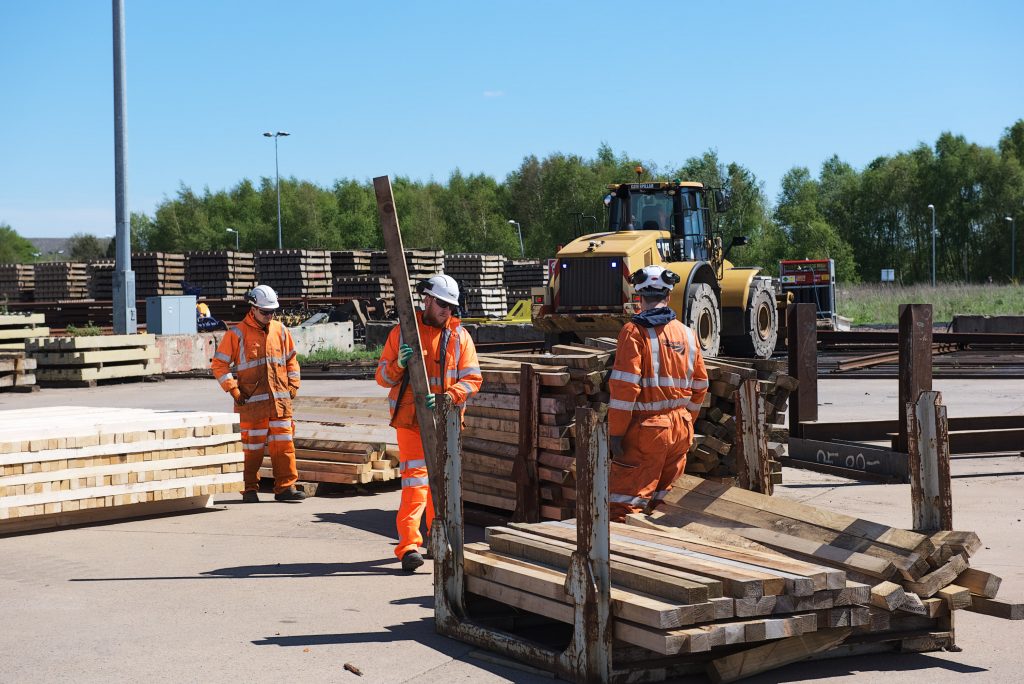 Historically, railways have been a male-dominated industry but companies such as Network Rail are trying to inspire and encourage more women to join the sector. By 2020, it is aiming for 20 per cent of ‘Team Orange’ to be female.

Natalie studied performing arts at university and didn’t originally set her sights on a career on the railway but her passion for the crucial work the centre does for Network Rail has grown and she’s seized opportunities to develop in her relatively short career.

“I just generally grew interest and wanted to know what everything was, why we do what we do, where it comes from, what we could do with it, and if there weren’t solutions for certain things, I was interested in finding ways to get things done,” said Natalie, who previously worked as a barmaid.

“Then, when my line manager said: ‘Okay, potentially I’m going to be leaving, what do you want to do?’ I said ‘Actually, I’d quite like to do your job.’ He basically took me through everything I needed to know to get this kind of role. When the job came up, I interviewed for it and thankfully got it – because I would have been disappointed if I didn’t.”

Natalie now manages 21 male and two female members of staff, but said that she has no issue with supervising a predominantly male workforce.

“Obviously it gets a bit male sometimes, and you’ve got to understand them if they’re talking about the football, but they’re absolutely fine. They’re so good to us. Being quite young, I’ve got a real mix of age ranges, some of them just want to look after you, some of them are your friend. You get a real mix of responses from people.

“I don’t see myself as a role model. At the end of the day, I just come to work and do my job. For me it’s about whether you can do the job or not, not whether you’re a man or a woman.”

The Whitemoor facility is located a mile down the road from Natalie’s hometown, March, and alongside some local factories, is a big employer for its residents. Natalie’s not the only member of her family to work on site. Her brother works at the aggregate handling depot and her mum for GB Railfreight.

Even her great grandad worked on the marshalling yard back in its heyday.

When she became site manager in July 2017, Natalie reached the highest position she can hold on site, and will have to look elsewhere in Network Rail to progress even higher. Not that she’s ready to turn away from working with the staff she treasures in an area of the company she’s so proud of. And rightly so, the facility injects millions of pounds back into Network Rail each year.

“Our route director, she’s female – Susan Cooklin – she’s right at the top of where we can be except for Mark Carne,” she added, talking of her industry role models. “So to see her, yeah, it makes you think ‘I could do that’. Seeing a female in that position you think ‘Okay I can get there’.

“I’ve got no engineering degrees or degrees in management, I’ve never done anything like that, but Network Rail, especially the materials team, has given me every opportunity I could have ever wanted to learn everything that I have done to get to where I am.

“A lot of people nowadays are like ‘no, I can’t do that because I haven’t got this’. That’s never stopped me. I’m one of those annoying people that are like ‘Why can’t I have it?’ If I want it or need it, I will go and get it. Network Rail really has given me every opportunity and trust, so I’m totally grateful for that.”

Read more: How does the rail industry compare on the gender pay gap?