From the London Underground to world domination

Shauni McDonald picked up her first award in 2011, quickly followed by another two in the same year. In 2012, she was presented with one more and then in 2013 she received yet another. Shauni has enough awards to fill out a trophy cabinet and she’s only 25 years old.

The Transport for London (TfL) manager is no newcomer to the industry, having started out as a sprightly 16-year-old operational apprentice. After roles in customer service, as a station supervisor and driving London Underground trains, she took up her current position as duty trains manager at the Harrow on the Hill depot in 2016.

A self-described ‘busy bee’, Shauni’s list of achievements doesn’t end there. She’s also become a TfL ambassador for apprenticeships and women, to help open people’s minds to the possibilities and opportunities available in the sector.

As she approaches her 10-year industry milestone, Shauni has already come so far and achieved so much, but she’s not stopping there.

“From the beginning of my career, I’ve worked really, really hard, but I’ve also had people that have been willing to give a little bit extra to help me achieve something too,” said Shauni, who is currently self-funding part-time studies in psychology to improve her HR employability credentials.

“My husband actually asked me where I was thinking of stopping a few weeks ago. He said: ‘You wouldn’t stop until you had world domination.’

“Well, I don’t think that’s quite achievable, but I would definitely like to see how far I can go.”

Harrow on the Hill is one of the busiest train depots on the Metropolitan line and is the base for around 130 drivers. As duty trains manager, it is Shauni’s responsibility to manage the train operators assigned to her depot while supporting the service delivery of the line and network. She has to ensure that train crews are in the right place should there be service disruptions. She’s also in charge of driver performance management, dealing with on shift issues, general admin and booking staff on – a mixture of welfare and operational duties.

She is a young manager, but not the youngest, and rests on her years of operational experience, including four years driving trains on the Metropolitan line, to understand what it is like to be in the shoes of her drivers and do her job to the best of her ability.

With various complex and wide ranging challenges to tackle, it all sounds rather stressful, but it’s an environment she thrives in – as she proved on the first week on the job.

“My first week was like a baptism by fire,” said Shauni. “I was getting married in about two weeks and I just thought ‘I just need a really easy, nice way to start this new job.’”

But not everyone got that memo. A huge fire near to the Preston Road Tube station caused severe delays because no trains could pass through the plumes of smoke. Weighing up the cost implications against further delays, she liased with the central communication centre and, acting on initiative, organised a shuttle taxi service for drivers to ensure they could get to where they needed to be.

“Shauni is a valued member of the team who brings an energy to the room when she enters it” said acting trains operations manager Tracey Tolchard, Shauni’s current boss who has known her for six years. “She has experience in customer services, line operations, service control and worked alongside the Metropolitan and British Transport Police forces during a period in surface transport. This is a massive achievement for someone so young.” 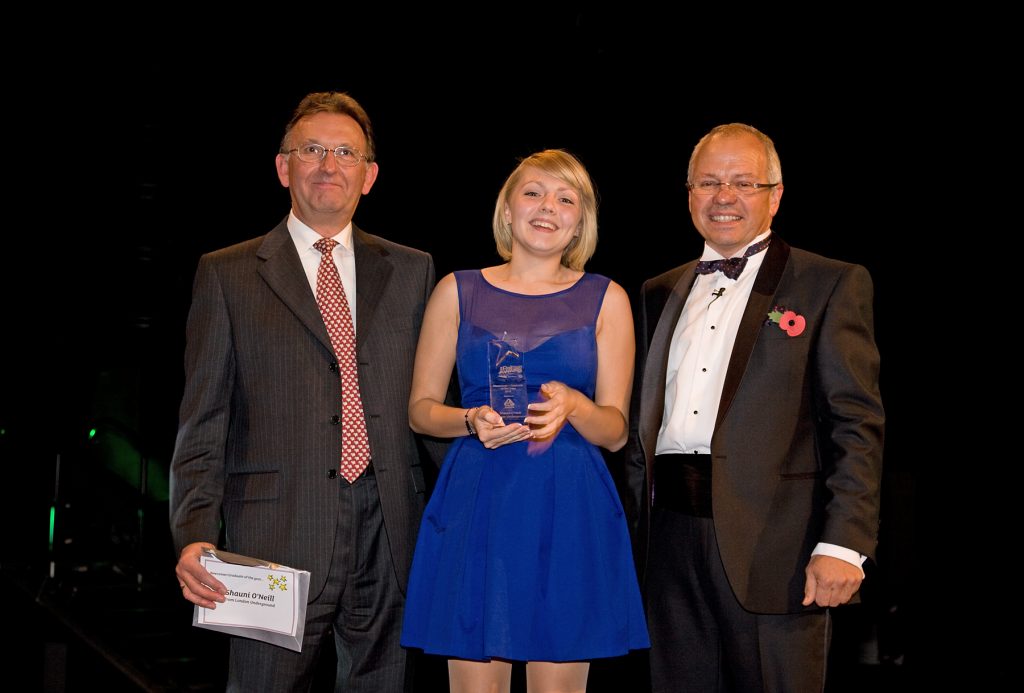 That early promise had been identified back in 2011 when Shauni scooped the Best Newcomer gong at the RailStaff Awards, one of her first award wins.

“I remember thinking ‘I’m just a normal person from a normal background and I just come to work and do my job and I love my job and do it to the best of my ability but, you know, is that enough to win?’”

It was. With her friends and family watching on – including her nan, one of Shauni’s most avid supporters – the teary-eyed then-apprentice stepped on stage to accept the award.

“My nan literally talked about it forever.”

“The RailStaff Awards is a very prestigious awards ceremony, in my opinion, because it’s got quite a reputation. So when I won one I was just like ‘Oh my god, this is the best thing ever’ – especially because of the people I was measured against, it was a really lovely feeling that, whatever capacity, I was deemed the person most appropriate for that award.”

Shauni is one of many RailStaff Awards winners who have gone on to achieve so much more. But, what heights does Shauni think she can reach?

“If one day I was sitting in Mike Brown’s office as the commissioner [of TfL] I would probably be thinking – ‘Why did you want this job?’ And also thinking ‘Yes, you finally did it!’ But I’m sure that, me being me, I’d get that job and think ‘right, what’s the next step?’.

With Shauni’s thirst to succeed we might one day not only see her name etched on an industry award but above the office door of the commissioner of one of the largest transport authorities in the world.

To make a nomination in the 2018 RailStaff Awards, go to: www.railstaffawards.com.