Mobilising the engineers of Generation Z

“Grey factories on grey streets on grey industrial estates.” Year of Engineering envoy MP Stephen Metcalfe knows engineering has an image problem. Since taking on the role in November, he has been helping industry to showcase the “Aladdin’s cave” of activity that goes on behind engineering firms’ grey doors, to inspire the next generation and tackle the skills shortage.

Stephen was part of a line-up of speakers at the finale of one of Network Rail and Mott MacDonald’s ‘Fast Trackers’ events, held at University College London on 27 June. Organised in collaboration with Industrial Cadets, Greater Manchester Higher and Higher Horizons+, Fast Trackers saw 16-19 year-old students from the north taken to the capital for three days of STEM activities. Another event focused on students from London was held a few days later.

“We face challenges both nationally and internationally,” said Stephen, addressing a lecture theatre filled with 150 students from areas with the lowest uptake of further education.

“Whatever you do from here on in, whether you do end up working in the rail industry or take your passion for engineering and do something else with it, carry on because you have the potential to solve some of the most serious problems the world faces.”

According to Stephen, only one in three people know what an engineer does, something he hopes to change by achieving the Year of Engineering’s three campaign aims. The first is to change perspectives, to expand the understanding that engineering is all hi-vis jackets, hard hats and tool belts. Another is to create one million interactions between engineers and youngsters, and the final one is to fill the talent pipeline.

Other speakers included Digital Railway managing director David Waboso and National College for High-Speed Rail CEO Clair Mowbray. Over the course of the event, students were treated to visits to the Institution of Civil Engineers, the Institution of Mechanical Engineers and from the Permanent Way Institution. They were also given guided tours around St Pancras and London Bridge stations to prepare them for the main event: designing a HS2-inspired high-speed line between Birmingham and London as well as a new Euston station.

As project managers, students were challenged to embrace the enormity of the task with environmental, commercial, social and practical implications to each decision. Some of the biggest saw them decide the alignment of the line, what adjustments need to be made to Euston station and the design of the railway’s rolling stock. Each needed to be reinforced by a strategic business case.

They also brought their own fresh ideas to the table. One group wanted to introduce more bomb-proof bins, another suggested using Pave Gen technology to convert kinetic into electric energy but they all showed an acute awareness of some of the industry’s most pressing issues and solutions to them.

The results were impressive. After spending two days researching, discussing and deliberating, students not only presented in front of a crowd of almost 200 people but confidentially spoke about ideas they would have had little or no understanding of beforehand. This included slab track, moving block signalling, leaning trains and ISO 14001 (the international standard that specifies requirements for an effective environmental management system). One of the most impressive displays was a faultless explanation of ERTMS – even with the extra pressure of the head of Network Rail’s digital signalling programme watching on.

Something out of nothing

At the end of the three days, VIP guests judged the best project and gave out awards for exceptional contributions. James O’Brien, a 16-year-old student from West Lancashire College, was given an Outstanding Student Award for his impressive knowledge of rail systems. He said he was unsure which specialist engineering field to pursue but that the day helped him to decide. He said it was the idea of “creating something out of nothing” that most attracts him to rail engineering and added: “[The event] has definitely broadened my vision of rail and engineering.

“I enjoyed the designing and thinking about the moral reflections that we had on this project. For example, we didn’t want to demolish houses or current infrastructure, to make sure it didn’t impact people’s day-to-day lives and cost more time and money, and in that way [the project] would get a better image. That to me was really interesting.” 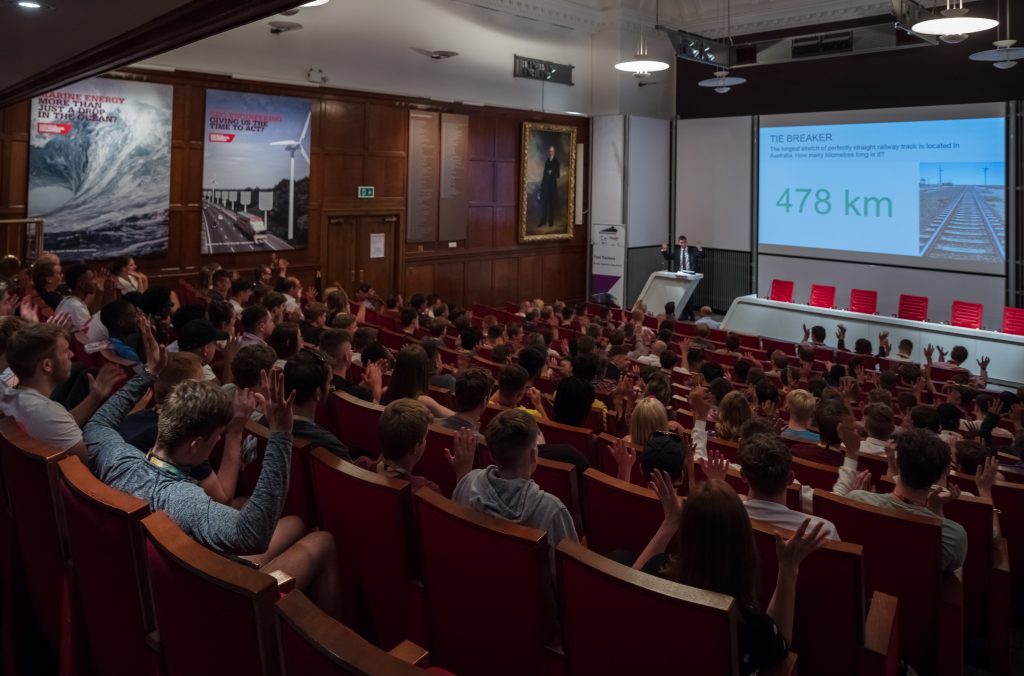 Another of the rail industry leaders in attendance was AECOM engineering director Joan Heery, who had the opportunity to chat to students and share what she believes makes rail engineering so important.

She said: “I’ve come to appreciate and learn how important railways are because they provide such a valuable service to the general public – and I don’t think young people really see that. Sometimes you might just think ‘I’m just working on a railway line’ but it’s like, no, you are providing a mechanism of freedom for people to make a choice to get from one place to another.”

The event’s true success can only be measured in many years’ time when students have decided which career to pursue, but the initial response was promising.

These students didn’t let where they have come from hold them back. If they can understand and explain technologies such as slab track and ERTMS after two days, you wonder where some of them will end up in two years’ time.

Over the last few months RISQS, under the stewardship of RSSB, has undergone various challenges. Despite all the recent changes - RISQS has remained...
Read more
Environment

Britain’s railways remain the safest and greenest forms of land transport, but there is no room for complacency.The independent rail safety body RSSB has...
Read more
Rail News

The reopening of the railway line between Okehampton and Exeter is one step closer after Network Rail finished relaying the new track and sleepers...
Read more