The ripple effect: Dealing with trauma

When a person loses their life on the rail network, the emotional impact on those involved can be huge. Family and friends, the train driver and those that witness the incident are the people most often thought about. But the impact can be far wider.

Each incident creates a ripple effect that spreads to a much larger group of people. Driver managers, station teams, mobile operations managers, train crew, British Transport Police, paramedics, maintenance teams, GPs, schools, retail workers and many others can all be affected, and it is vital that steps are taken to respond.

The rail industry has been calling upon Samaritans’ extensive network of volunteers across Great Britain to provide a post-incident support service to rail locations since 2011. This service has been utilised more than 540 times in a little over seven years and has seen Samaritans volunteers dropping everything to support rail staff and passengers after traumatic rail incidents, often on the same day or the following days and weeks.

When Samaritans post-incident support teams are contacted after a traumatic rail incident, a text is sent out to listening volunteers trained to provide emotional support outside of branch (ESOB) in the region of the affected station.

Jacqueline is a volunteer for Bexley and Dartford Samaritans. Volunteers often use an alias when taking calls to protect their own anonymity. She responded to a request for support after a tragic death at a local station in 2017: “I was at home when I got a text requesting support. There had been a suspected suicide at the station that day and volunteers were needed for the staff who had been affected.

“My first thought when I read the text was ‘Oh how awful – that must have been a really difficult situation for them’.”

To ensure the safety and wellbeing of the volunteers, a minimum of two are needed to provide post-incident support. Often this support is informal, however in this instance Jacqueline and a fellow Samaritan, Marion, were asked to provide formal face-to-face support to staff.

“Everyone we met was incredibly welcoming and I was immediately struck by how concerned and caring the station managers were about the wellbeing of their staff.

“I guess we spoke with the first person for about 45 minutes. As a witness to the incident, they had been through an incredibly traumatic experience and my initial reaction was, how can I support them? But that’s when all my Samaritans and ESOB training kicked in: ‘So how are you feeling today?’ I asked.

“We must have talked with the three staff members, and station managers, for about 2-3 hours. Afterwards, Marion treated me to coffee at the station, which we both really needed.

“Leaving the station on my train, I felt incredibly tired, but it was a great privilege to be able to put all my Samaritans training and skills to use supporting people who had suffered something so distressing. Later that evening, after having something to eat and a cup of tea, I had a long conversation with my branch director to debrief.” 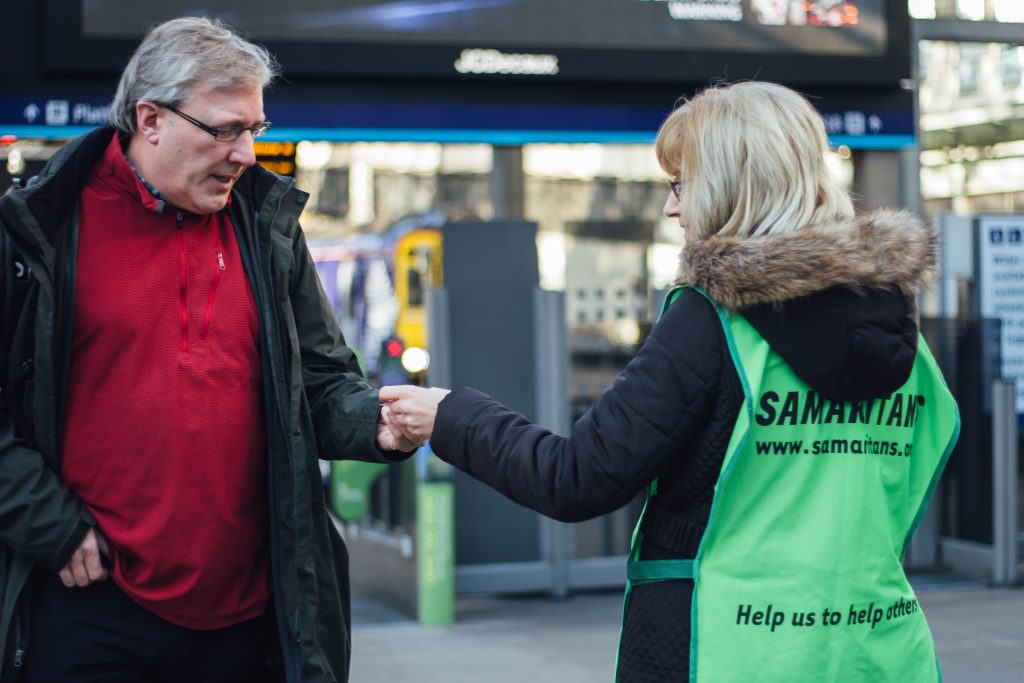 Simon Ring, station manager for Govia Thameslink Railway (GTR), has sadly had to call upon Samaritans volunteers several times, including on this occasion where Jacqueline and Marion responded: “When we have an incident here the first two calls that I make are to Samaritans post-incident response team and to the Railway Chaplain. When we have an incident of that nature, this is the process we follow and obviously Samaritans volunteers are part of that process.

Simon has recognised the benefit of the assistance Samaritans can provide in supporting his team members.

“If they witness a traumatic incident, it is quite often the first that they’ve ever witnessed. It’s obviously very upsetting for them. In fact, one of the reasons that I like Samaritans coming to the station is that you don’t actually have to have been a witness, even to hear about it can still have a traumatic effect on an individual, even if they are not on duty at the time.

“I can certainly say that staff have given 100 per cent positive feedback for Samaritans support. One individual, who had some time with two volunteers, said it was so helpful because he didn’t know the volunteers and could just say whatever he wanted and it was OK.”

Alongside supporting his staff, Simon has also set up Samaritans support for a concession worker and sees the benefit on passengers too.

“That’s the whole point that volunteers are there, they are well marked, but unobtrusive and they are there for everybody.”

The suicide prevention charity Samaritans has been delivering an award-winning suicide prevention programme alongside Network Rail, British Transport Police and the wider rail industry since 2010. Whilst preventing suicides is a focus for this programme through training, communications and outreach, raising awareness of the impact of trauma and improving the support for staff is also a key part and is included in the industry’s guidance for creating a suicide prevention plan.

If there is a traumatic rail incident and Samaritans support is needed for staff and/or passengers, you can call Samaritans 24-hour response line on 07548 720511. Please note Samaritans volunteers do not attend lineside locations such as level crossings, foot crossings or bridges.

For more information on Samaritans partnership with the rail industry visit www.samaritans.org/railindustry, or email [email protected]

Samaritans is sponsoring the Lifesaver Award at the 2018 RailStaff Awards.