As we enter the New Year, here at British Transport Police we are looking ahead to how we can continue keeping safe the millions of people who use and work on the railway network every day.

An important part of this role is ensuring we work together to prepare against the possible threat of terrorism. Security alerts and world events last year were a stark reminder to us all – police, the public and rail staff – of the need to remain alert. That’s why British Transport Police took part in National Counter Terrorism (CT) Awareness Week in December, a week-long programme of activities aimed at raising awareness around this important issue. Communities defeat terrorism, and as part of the railway community, rail staff are a vital part of this community response.

Throughout CT Awareness Week we took part in a range of activities, including high-visibility patrols across the UK and social media activity to tell the public about how we work to keep them safe and how they can help.

The awareness week followed the launch of the ‘See it, Say it, Sorted’ campaign in November, created in partnership with the Department for Transport and the rail industry, in which we ask rail passengers and staff to help keep themselves and others safe by reporting unusual items or activity on the railway. We rely heavily on passengers and staff to be our eyes and ears.

Posters started to be displayed at major railway stations across England, Scotland and Wales from 1 November 2016 and updated security announcements were made at stations. The campaign will be rolled out across the rest of the rail network in 2017.

Says Assistant Chief Constable Alun Thomas, ‘Millions of people travel on our railways every day. We encourage the travelling public to report suspicious activity to staff or police, and often as there are more members of staff visibly in the station it will be they who are approached by members of the public who are concerned about something. Therefore it’s very important that rail staff are all trained to respond to this correctly.

‘We are not asking members of the public or rail staff to decide whether or not something is a concern, or to assess something as being terrorism related. That’s what we are here for. We would certainly never expect staff to put themselves at risk – which is why we put so much emphasis on training rail staff and on our relationship with them, so we can work effectively together.’

At British Transport Police, we provide training to rail staff through Project Griffin, a national initiative which aims to make sure staff feel enabled to recognise and report suspicious activity and guide them on what to do if they were ever to find themselves involved in an incident.

Throughout last year, our specialist advisors ran more than 200 free sessions, reaching more than 3,400 people from a range of industry partners and business across the UK – including in Glasgow, Sheffield, Cardiff, Bristol, Leeds and Manchester.

These sessions included topics such as possible methods of attack and aim to raise awareness of terrorism, build effective working relationships and empower people to report suspicious activity.

Says ACC Thomas, ‘The Project Griffin sessions are a really valuable way of building partnerships with staff across the industry and other businesses. It’s all about the police, rail staff and public cooperating and nobody should worry about wasting our time; it’s better to trust your instinct and contact us if you feel something isn’t right. No piece of information is considered too small or insignificant.

‘Things to look out for include someone being somewhere they shouldn’t be, for example trying to get through a door marked ‘ no entry’, an unattended bag, someone checking security arrangements, for example filming CCTV cameras at a station, or someone avoiding rail staff and police officers.

‘Of course we don’t expect rail staff to decide whether or not something is terrorism related. That’s our job. We have a number of expert units trained to work in the unique and challenging railway environment, but it is vital that people report things to us whenever something doesn’t feel right.’

The BTP Specialist Response Unit (SRU) is one of these unique teams, made up of highly skilled officers who respond to reports of suspicious and unusual items on the railway and underground network that could be terrorist related, whilst minimising disruption to passengers.

SRU officers operate under pressure to make difficult decisions about the threat posed by unattended items on the railway network. Part of their role is determining whether items are simply lost property or something which will require additional specialist response. 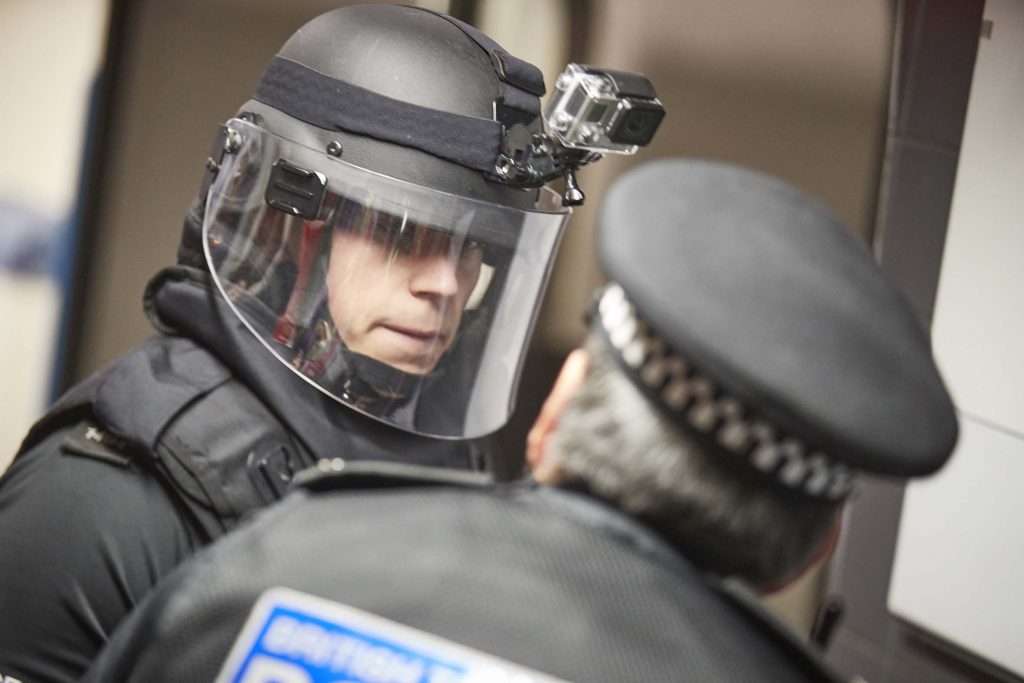 The SRU responds to a wide range of reports of unusual items which cause concern to rail staff or members of the travelling public. Officers are trained to make assessments in a way which minimises as far as possible any disruption caused to passengers or rail services. This is a unique role. BTP is the only UK police force which has a dedicated, fully trained and equipped team, operating around the clock for the purpose of assessing threats in this way.

As well as dealing with unattended items, SRU officers are also trained and equipped to deal with chemical, biological and radiological threats.

The SRU officers have all the skills of a response police officer but also undertake additional, intensive training for this specialist role. Their training and experience means they are ideally equipped to work in the railway environment, which presents its own distinctive challenges.

It’s not just about people; even our four- legged friends have a part to play in the fight against terrorism. Our dog unit was named Dog Section of the Year by the Worshipful Society of Security Professionals for their outstanding contribution to the protection and safety of the travelling public and response to an ever- growing and changing terrorist threat. BTP dogs are paired with handlers who train and work with them – some are general purpose dogs and others are specially trained in searching for explosives.

The dogs and their handlers take part in Project Servator deployments, which staff may well have seen at railway stations across the country in the past year. During CT Awareness Week we celebrated our one year anniversary of Project Servator, which is now being adopted across the UK by other police forces.

Unpredictable and highly visible, the aim of Project Servator is to deter crime before it happens, by detecting where it might be taking place and stepping in to stop it.

The deployments could include armed officers, dogs, behavioural detection officers or high profile uniformed cops – and they could pop up anywhere, at any time.

In the past year, there have been more than 400 deployments across the network – from Glasgow and Edinburgh to Leeds, London, York and Cardiff.

‘We are investing in our counter-terrorism response and ensuring that the public and rail staff are fully equipped to do their bit – the message is to be alert, not alarmed,’ says ACC Thomas.

‘The work rail staff do is greatly appreciated by BTP – we would struggle to do our job without them and I’d like to thank you all for your continued help each year.

‘We’re all working towards the same aim and together, we can continue to keep the travelling public safe.’