With snow, gales and gusts of up to 94 mph hitting parts of Britain, Storm Doris was a ‘painful event for the railway network’ recalls Network Rail’s go-to authority on lineside safety, Paul Meads.

The weather bomb, as the Met Office later classified it, caused transport disruption across the country but arguably nowhere was the impact felt greater than on the Conwy Valley line.

On 23 February, a tree fell onto the Welsh line between Llanrwst and Blaenau Ffestiniog, Snowdonia – close to where the Met Office recorded Doris’ highest winds – disturbing lineside vegetation on the nearby rock face.

More than six weeks after it had closed, and only after Network Rail conducted an aerial assessment of the rock face and completed essential repair work, it re-opened to services.

Network Rail preemptively issued temporary speed restrictions on parts of its network, deployed extra staff and issued warnings of delays but it could not prevent the impact of the fallen tree.

A delay of that magnitude is not common – there were logistical issues due to there being no road access, dense vegetation and extreme weather conditions to contend with – but trees falling onto the railway cause thousands of pounds of damage and thousands of minutes of passenger and freight service delays each year.

In 2016, there were more than 470 incidents of vegetation on the railway, from compounded fallen leaves affecting train braking to fallen branches causing overhead line dewirement and trees blocking routes entirely.

Network Rail is unable to give a precise figure for the cost of dealing with vegetation incidents but, according to the Linear Infrastructure Network, a group made up of infrastructure asset owners, managers, consultancies, Government and its agencies, the annual cost of vegetation impacts on train performance to the UK economy is £100 million.

Network Rail decided the answer to the problem was to survey the estimated 10 million trees across its 20,000 miles of railway.

It may sound like an epic challenge but that is exactly what has been done, with the help of aerial surveying from drones and helicopters.

After capturing the data, which covers a number of tree attributes, it is fed through a risk model, simply referred to as a black box, which outputs key problem trees in priority order.

Beginning in 2014, the tree census has covered nearly all areas of the rail network – except for exclusions around airports, for example – and is the latest offering from the Offering Rail Better Information Service programme (ORBIS), a programme aimed at supporting the railway industry by collating, analysing and exploiting data.

Already ORBIS has helped to save £207 million, according to Network Rail, by helping engineers to make smarter decisions and it expects to save another £281 million by 2019.

The census is being rolled out across the country and promises to revolutionise engineers’ work by providing them with a heat map of high priority problem trees that could later impact the railway, explains Paul Meads, who leads the development of lineside policy.

‘We’ve surveyed up to 60 metres either side of the railway covering 20,000 miles, and catalogued over 100 different attributes per tree including height, thickness, health, slope angle, proximity to bridges and power lines, which are measured to predict the risk an individual tree represents to the railway,’ he says.

‘Our analysis revealed the majority of trees that fall on the railway during storm conditions are healthy – yet previous inspections may have assessed these as lower risk.

‘Scotland had done their own survey before 2014, they’ve led the way with this – because they tend to suffer the more extreme weather – and we have adapted their version.

‘They are at the forefront of how we can benefit from this and we are working closely with them.’

Previously the requirement was that Network Rail would undertake the ‘arduous’ process of walking along the line looking for any potentially problematic trees every three years.

This was supplemented with a more thorough report every five years assessing the trees in greater detail.

‘From the first use of the data I was able to identify areas to be managed and remove the need for a tree survey in those locations. This allowed for immediate cost saving for the route,’ says Alex Hinshelwood, Network Rail’s senior asset engineer in Wales, who uses the database in his day-to-day work. 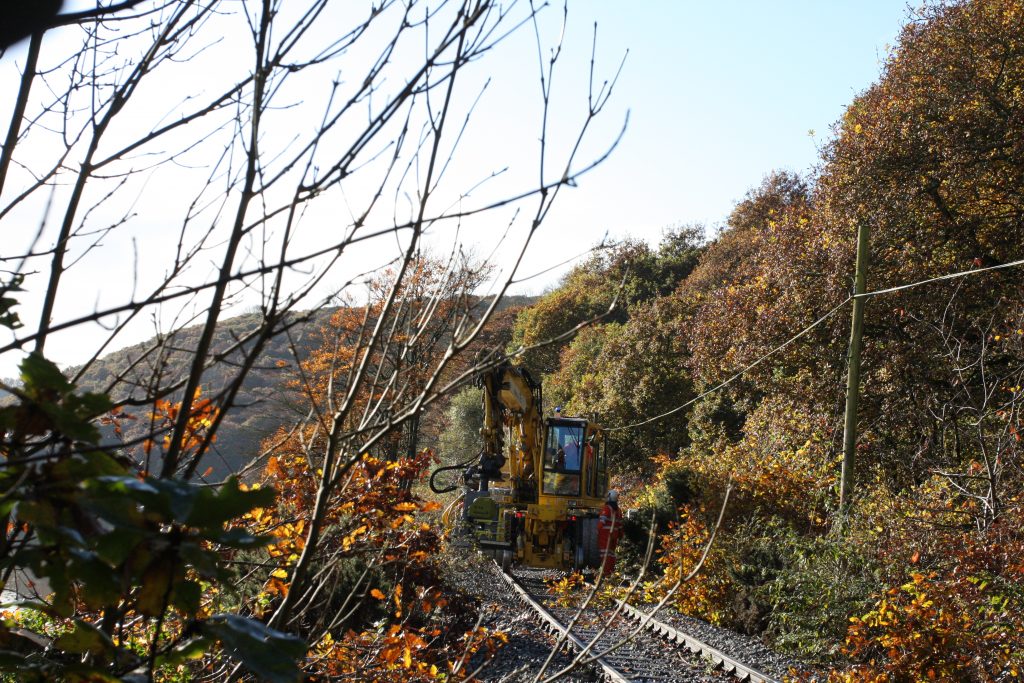 ‘From my desk, I can analyse the trees that pose a risk to the railway, and using this data, I am able to develop a work bank for our vegetation management teams.

‘Now, with targeted, evidence-based information, I can save money and reduce the need to carry out lineside surveys.

‘The new heat map is an extraordinary development; I can click on the Cardiff area and in an instant highlight where potential problem areas exist.

‘The clustering data shows how many trees exist and you can drive right down to individual trees to uncover a range of different details, from height and location, to tree width.

‘We can’t simply cut down every tree on the lineside; we have to consider the natural environment and the impact of our work on our lineside neighbours.

‘The vegetation management data has the potential to completely change the way we carry out vegetation and tree management across the routes and will be an invaluable tool that can be used with our existing inspection records and asset data to help us make real asset management decisions.’

By using the tree census, Network Rail is expecting there to be a dramatic reduction in the number of trees falling onto the tracks, as a result reducing delays and should be savings thousands of pounds.

There is also a safety consideration, reducing the risk to trains and, by reducing the time they spend trackside, improving the safety of workers, which will free up manpower for more productive activities.

‘Our use of the tree census is emerging,’ says Paul. ‘Feedback will be useful to see the benefits that it has.

‘I can sit here and say there are a great deal but we are really trying to understand how it is being used.

‘It’s very much in its early days but I think it will have a real benefit to the rail industry as a whole.’

In future, with the technology to identify and target trees before they become problematic to the rail network, it is hoped that prolonged delays such as those experienced on the Conwy Valley line can be avoided entirely.

Rail team of the year

Young Rail Professionals – securing the future of the industry

Rail team of the year

Young Rail Professionals – securing the future of the industry